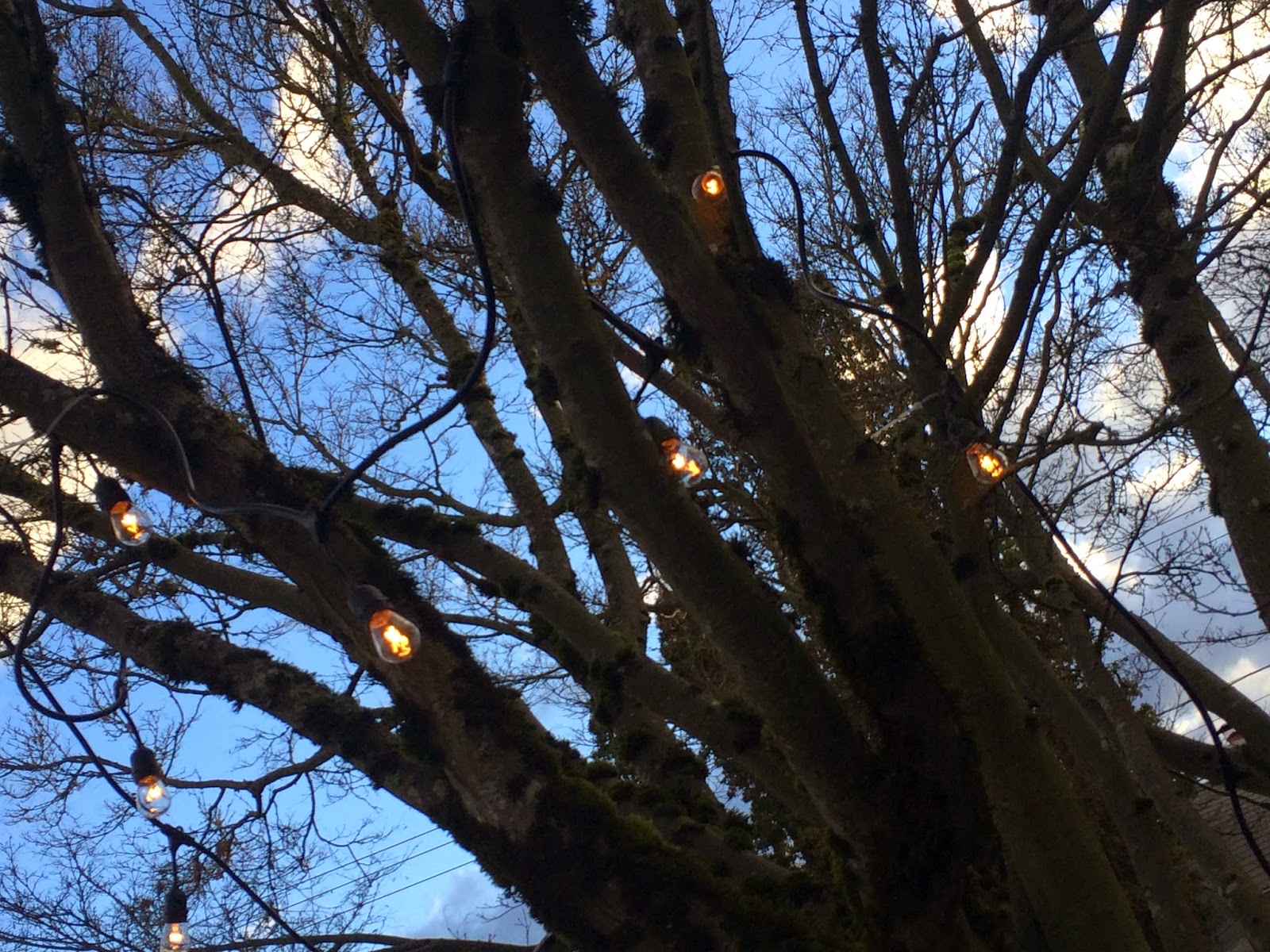 So, when I'm not making art, working or petting cats, I'm usually out on my bicycle, or I am when it's not raining, anyway. When it comes to rain, I'm with the cats on the subject...nasty stuff to be out in! Especially since I really don't believe in special clothing/gear for riding – bicycles are for everyone, and you don't necessarily need fancy spandex/goretex/whatevertex to enjoy them.

I love riding. It's great exercise and there's always so much beauty out there. Today I was fascinated by the quality of the light and the changeful sky. Over the course of the day, the cloud cover thinned and broke up and reformed multiple times, but even when the sun was covered, the valley still seemed to be especially luminous. In my head, I used words like pearly, opalescent, golden, milky, magical, and wished that I could somehow capture all those different lights with my camera.

Read more »
Posted by CrowGirl at 9:43 PM No comments:

In The Sea Of Stars 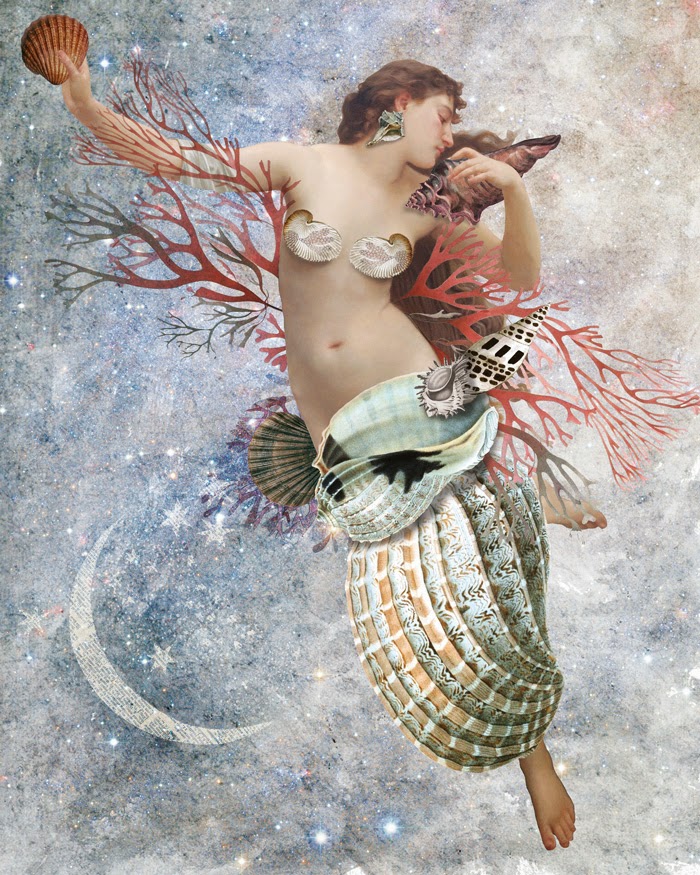 Print available in my InPrnt gallery.
Posted by CrowGirl at 1:52 PM No comments:

In my imaginary worlds, pretty much everyone and everything can fly, in one way or another.

Available as a print in my InPrnt store.

Posted by CrowGirl at 9:17 PM No comments: 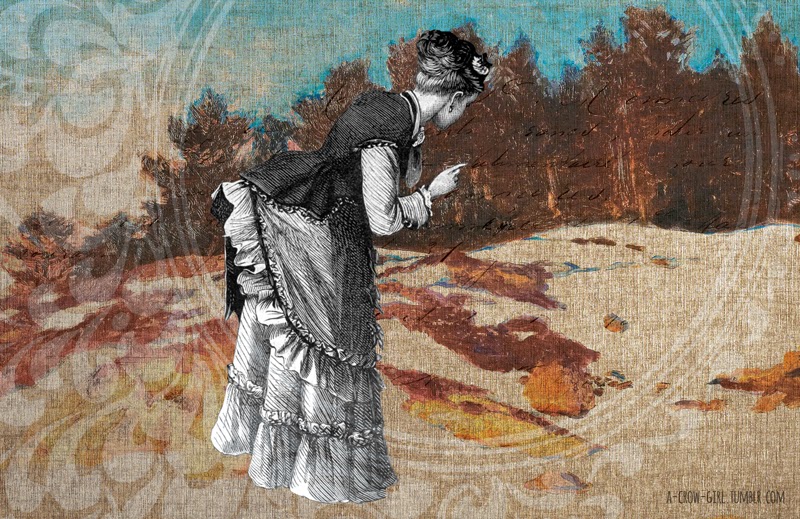 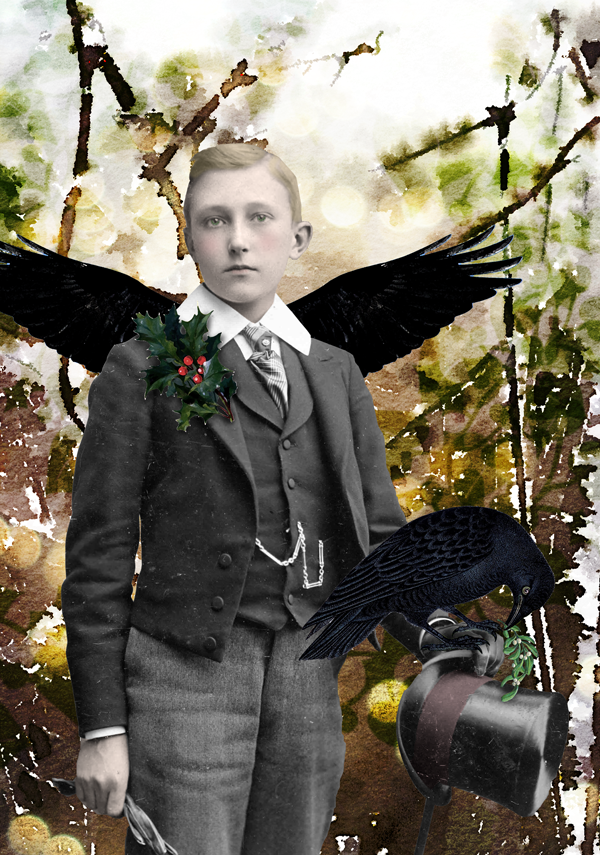 Posted by CrowGirl at 3:21 PM No comments:

The Painter Dreams of Spring 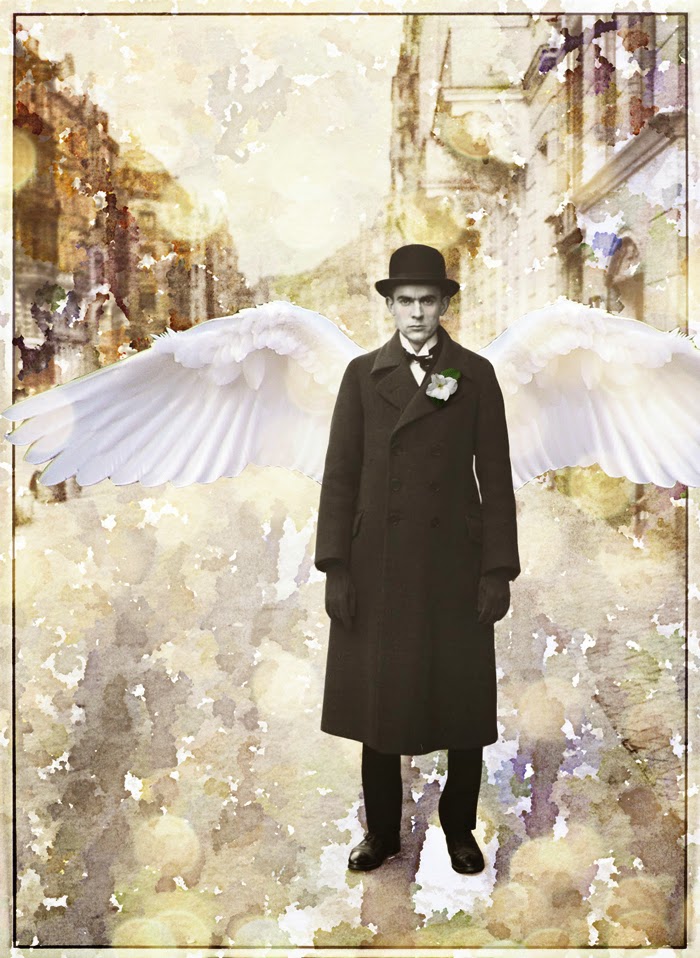 My riff on August Sander's "The Painter".
Posted by CrowGirl at 5:19 PM No comments:

Alone With Her Egrets 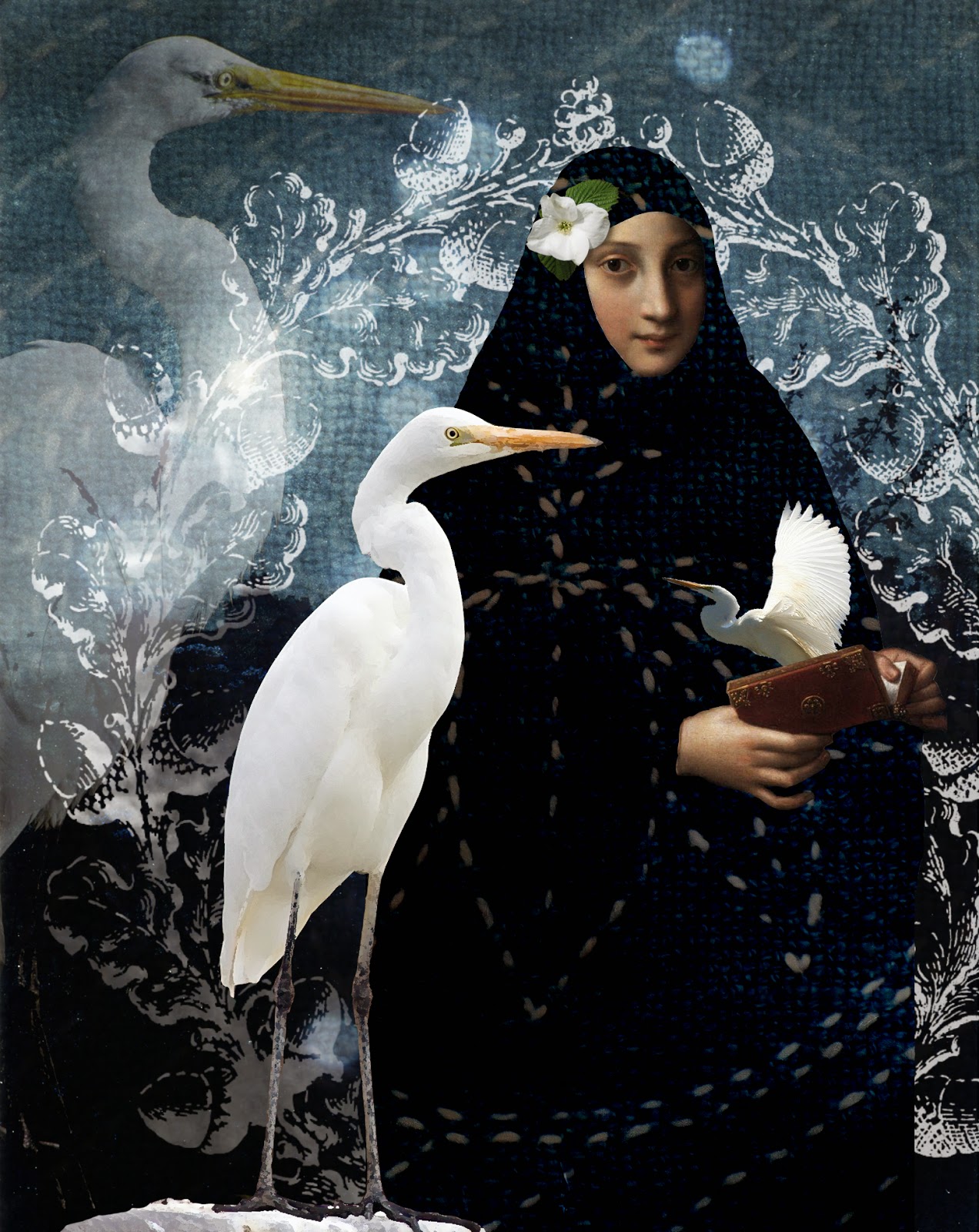 Posted by CrowGirl at 5:55 PM No comments: 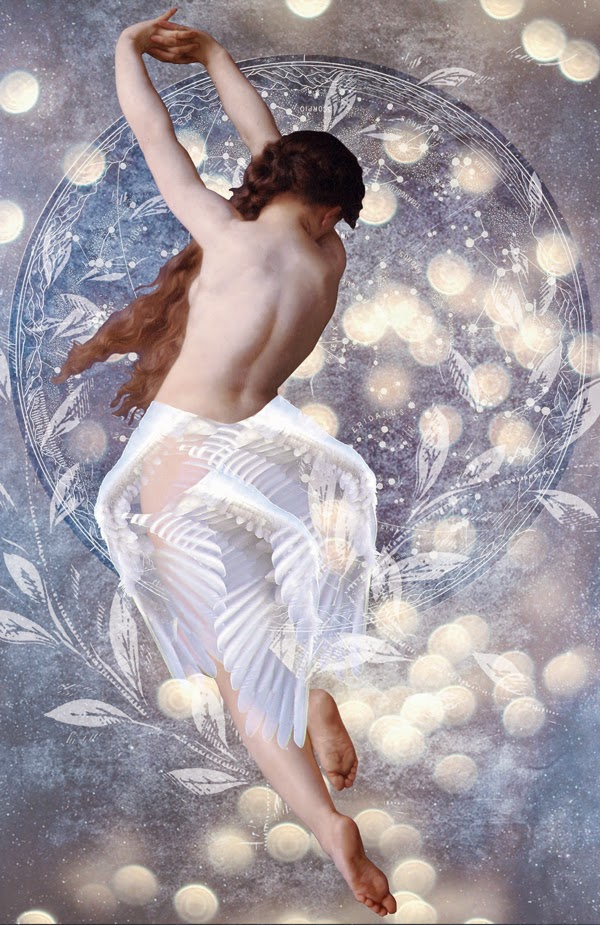 
Around here, fall has finally come and is firmly ensconced in the changing of the leaves, the falling of acorns, the scent of woodsmoke in the air, and oh yes, the rain. Goodbye, sun, see you in May...if we're lucky.

As someone who likes to take each season as it comes, it makes me a little crazy to have to be thinking about winter when we're one month into autumn, but there it is – the life of an artist.

Although, I am told by highly reliable sources that some people are already looking forward to sending Christmas cards and going crazy with decoration and all that festive stuff. I must confess, I am as well, maybe just a little.

Anyway, I have some winter and Christmas themed cards in the Crowgirl Studio Etsy store right now. Here's to looking forward to the festive stuff!

“Autumn is the mellower season, and what we lose in flowers we more than gain in fruits.”
― Samuel Butler
Posted by CrowGirl at 10:12 AM No comments:

Lately, I've been having a lot of fun playing with animated gifs. It's good to have something to do just for fun – just to (hopefully) make people smile. It helps keep me focused on having fun and not to get too bogged down in being Serious About Things.

Like most of the artists that I know personally, I'm more than a bit of a packrat. Especially when it comes to books. I have, um, a lot of books.


In my own defense, I have to say that it runs in the family. My mom once had so many books in her room, it was bowing her floor down. The solution was not to pare down books, as some sensible (and perhaps book-hating – yeah, I said it) people might have suggested, but to install a sturdy post under her floor. Problem (temporarily) solved. She didn't have to let one book go.

Now I, on the other hand, occasionally try to recognize that I have a problem (not enough shelf space for my books) and weed out a few. Books with little sentimental value, books I haven't read in years and feel no desire to read again, books that belong to a part of my life that is done...while I won't say that it is easy to pass these on to their next owners, it is easier to let them go.

That's what I was doing in August when I started my collage project. I was looking at a shelf full of books on collage and mixed media and thinking "you're not doing collage right now. You haven't done collage for months. You should pass these on to someone who will actually get some use out of them if you're not going to."

"Oh yeah?" I told that inner voice, sticking out my tongue for unquestionably mature good measure. "We'll just see about that."

And what began as a ploy to avoid paring down my library turned into something amazing. 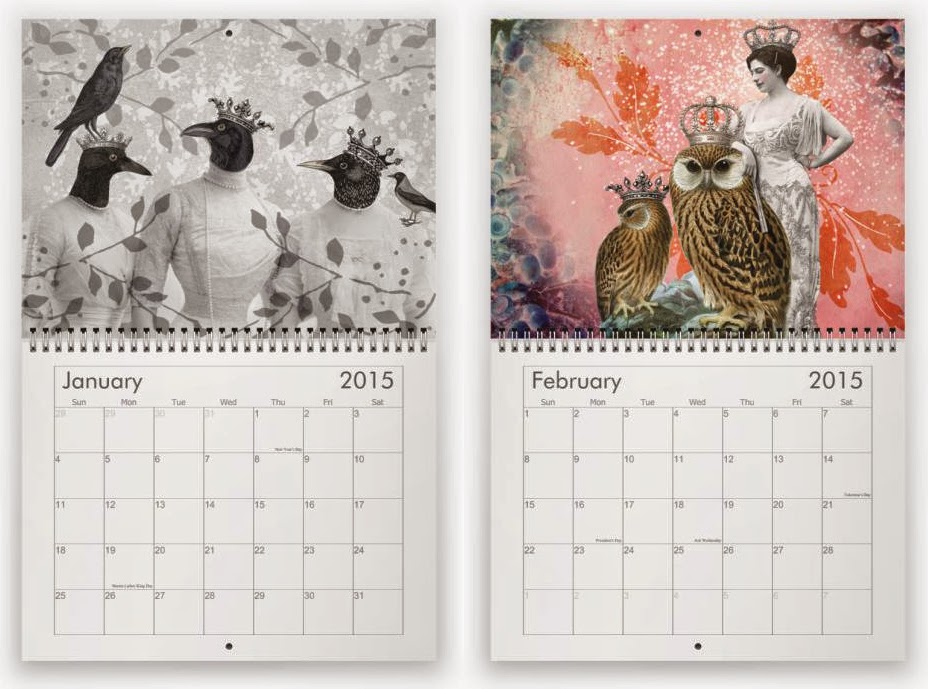 Read more »
Posted by CrowGirl at 4:37 PM No comments:

Email ThisBlogThis!Share to TwitterShare to FacebookShare to Pinterest
Labels: Etsy 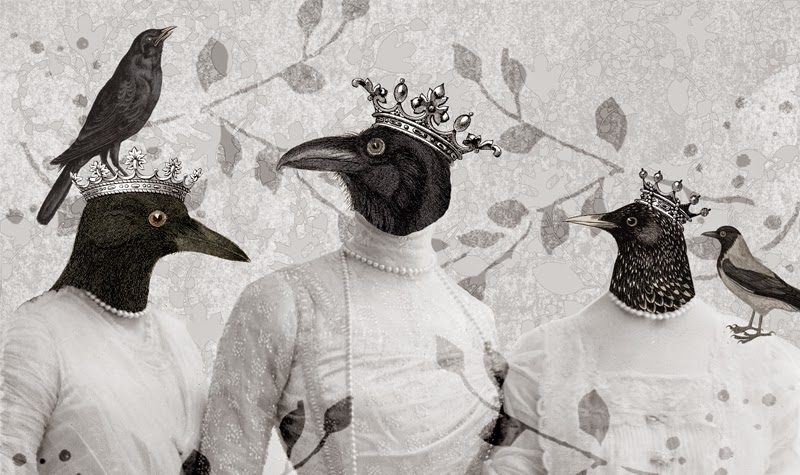 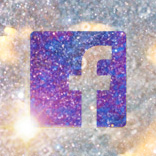